I’m currently on a new life changing path, experiencing pain like no other. I have lost majority of my sight in my right eye, with no professionals being able to say if I shall regain this… doing what I only know how to express myself is through writing. Whether it shall be read or not I feel better in myself putting my story out there.

Battling a invisible illness has really crippled me, mentally, emotionally and physically. I know that phrase is used often and so over worn like your favourite pair of jeans.

I’ve fallen out of love with things that truly identified ME. I stopped doing these things, no longer was they enjoyment and turned into a chore. The illness had gripped me, left right and centre, there is no ignoring the chronic daily pain I’m in. There is no escape from the attacks, just like there is no knowing when it’ll strike. Night time feels like only what I can imagine graveyard shift to be. Slowly anticipating when or If the enemy is approaching. The lonesome of dawn being in the most agonising pain, pacing the lounge floor. Googling each forum, each medical reports… no amount of pain relief… oxygen support… hospital admissions free you from the grips of this. Your own brain is destroying you… LIVING A LIFE WITH SUICIDE DISEASE.

Beneath the surface of a late twenty something woman, who’s life must portray a easy going, happy care free mother of three, but that’s the thing with social media it stimulates a fictional character.

But beneath the surface, behind closed doors, I suffer deeply from a disorder so intolerable it is sometimes referred to as “the suicide disease.” The condition is called trigeminal neuralgia, and it’s said to cause the worst pain known to man. And I genuinely would much rather endure tummy crunches straight after a c-section, 100 times over, than suffer an trigeminal attack.

The condition simply causes unbearable pain known, there is no treatment no cure. I remember being on oxygen support, looking towards the register with a longing look to hear something comforting. It was only when he told me my condition is beyond medication. I may stop responding to the nerve blocker medication at anytime. No pain relief touches the sides whilst the attack is flaring, the only thing to do is sit back and take on this anticipated, most excruciating pain of your life, not knowing how long this attack will last. 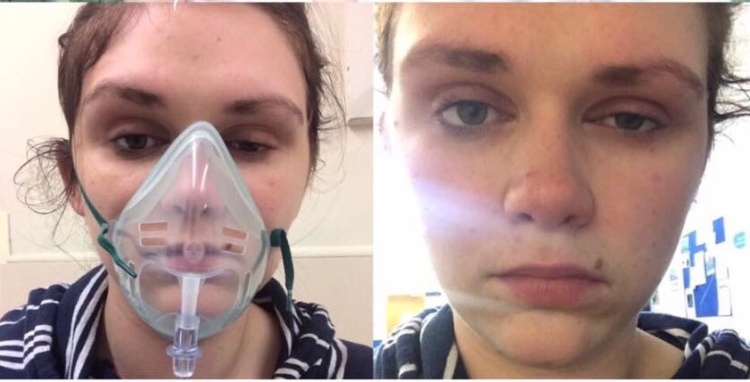 Like the rare few others with this disorder, the pain is so tortuous it drives us to our knees. There are multiple of sensations we endure whilst the attack is blazing through our nerves, being slashed with razor blades. Like a searing hot knife ripping through your jaw; being constantly jabbed with a cattle prod; or like you’re face is on fire. And once an attack starts, there’s nothing you can do but endure it, which is why some take their own lives.

Painfully these sufferers see it as the only way to end the pain. They simply became victims of this agonising disease. It’s a life-changing, debilitating disease, and you wouldn’t want your worst of the worst enemies to have it…

A late twenty-something mother of two boys and a profoundly deaf diva of almighty sass. In between splitting spontaneous sibling wars, curiatimg pillow forts and channeling inner superheroes. Mothering Silence documents a brutally honest truth of the trials and tribulations of motherhood. (The toughest hood.) Here you'll find the weekly ramblings of the rollercoaster life of my journey in motherhood. *Please note my style of writing is tongue in cheek. View more posts